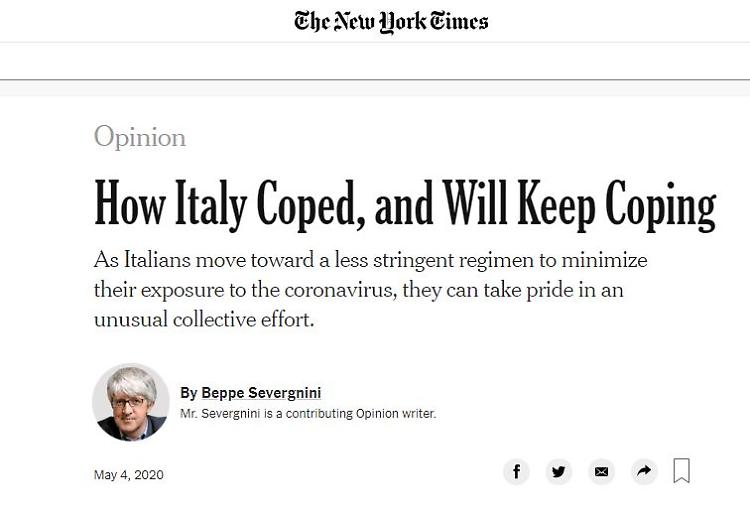 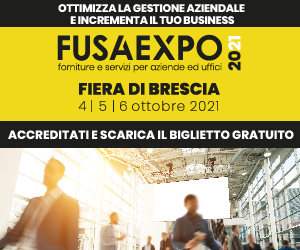 "How Italy Coped, and Will Keep Coping"
As Italians move toward a less stringent regimen to minimize their exposure to the coronavirus, they can take pride in an unusual collective effort.

CREMA, Italy — The first country outside Asia to experience the coronavirus pandemic on a large scale was Italy. It was the first to go into lockdown and impose a national quarantine, on March 9. And it is the part of Europe that suffered most. As of May 3, 29,000 people were known to have lost their lives because of Covid-19. The actual figures are likely to be higher, as they will be everywhere else. My northern region — Lombardy, Italy’s economic powerhouse — has registered half of the country’s deaths. Army truck convoys carried coffins to crematories around the country from Bergamo — where the death rate in March and April rose to more than four times what it was last year. Brescia, Lodi, Cremona and Crema — where I live — were also deeply affected. My hometown has been a ghost town for two months. People moaned but stayed at home.

On Monday, Italy started reopening, but cautiously. Limited outdoor activity will be allowed, and visits to relatives, partners and lovers (“affetti stabili,” the government called them, opening a national debate about what makes your affections stable). Factories and construction companies are allowed to go back to work. On May 18, it will be the turn of shops. On June 1, if the contagion rate stays down, bars and restaurants will reopen. Schools, stadiums, theaters and churches will remain closed. Face masks will be compulsory on public transportation and in confined public spaces. More coronavirus tests are available, and a contact-tracing app, based on Bluetooth technology, should be near distribution.

The path that Italy strode before getting to this point has repeated itself in every coronavira-stricken country. First, the underestimation; then the disbelief, the shock, the lockdown. Next, jokes shared on smartphones, mood swings, the reassurance of the national anthem. At that point, after two weeks of lockdown, reality kicked in. We realized that the challenge was a long-distance run, and we started running.

Here in Crema the hospital was being overwhelmed by patients, many needing intensive care; the Italian Army built a field hospital in a week, and a Cuban medical brigade, composed of 52 doctors and nurses, arrived on March 26. For the next three weeks — until after Easter — ambulance sirens filled the air under blue skies, blooming trees and the loveliest spring for years.

Now that we are beginning to relax the lockdown — cautiously, anxiously — perhaps we can say it: Italy coped. The national health system sustained the impact, although 153 doctors and over 50 nurses lost their lives, and thousands were infected. Sixty million people stayed at home and, by and large, followed the rules. That was a surprise, given our reputation for being undisciplined.

But is it surprising?

In Italy rules are not obeyed — or disobeyed — as they are elsewhere. We think it’s an insult to our intelligence to comply with a regulation without questioning it first. We want to decide whether a particular rule or regulation applies to our specific case. Once we’ve established that it does, we’ll respect it. With Covid-19, we decided the lockdown made sense — so there was no need to enforce it.

We coped because we found other resources that were always there: realism, inventiveness, extended families, solidarity, memories. The architect Carlo Ratti, director of the M.I.T. SENSEable City Lab, who’s from Turin, puts it this way: “For centuries, invaders — the Spanish, the French, the Austrians, the Germans — held authority over we Italians. Now we are the authority; the invader is a nasty virus. Bonding was the obvious thing to do.”

We are a social bunch, and the web just provided us with extra tools. Family and personal relationships — whose importance in Italian life cannot be underestimated — helped a lot in this crisis. Men cooked for their families with the help of their children, while mothers became part-time teachers. Friends sought out friends; if they were unwell, even more so. Aperitivo on the balcony — toasting with your neighbors — was no one-off Instagram occasion; for many, especially people living alone, it became a regular, soothing way to end a nerve-racking day.

Italy has the largest share of people older than 80 among all European Union member nations. Half the deaths happened in nursing homes, as in other countries. But many grandparents live at home, often near their grown-up children; they spend time with their grandchildren and often replace babysitters. This time they had to stay away, of course, for fear of contagion. But they learned quickly how to help by supporting their children’s families financially from their own safe homes and tried to cheer them up. Most learned new tricks — Zoom and FaceTime have no secrets for Italian grandparents.

A pandemic, like any major crisis, is revealing. It’s a lie detector for individuals and for nations. People can bluff for a day, a week, maybe a month, but not throughout a time like this.

American culture has a libertarian streak and there it was last week, from Michigan to Pennsylvania, asking for “reopening,” encouraged by the president who had ordered the restrictions. The French have always shown a flair for protest and unrest, and they duly arrived, in their suburbs, following lockdown restrictions. Swedes believe in an open society, and they were the last to close, reluctantly. Quite a few Britons, lately, have come to believe in conspiracy theories. The burning down of phone towers there, in the grotesque fear that 5G cellular networks helped to spread the virus, proves the point.

In Italy, so far, no arson, no rioting, no rallies, let alone armed protest. Just the odd fool who’d drive around to see whether he would get caught by the police. We decided that the lockdown made sense, and for two months we locked ourselves down. The rulers should congratulate the ruled, for once. The Italians deserve praise and gratitude.

And there is a way for the government in Rome to show it.

As a substantial amount of expected European Union money becomes available, the Italian government should try to create a new Italy, more efficient than the old. During the emergency, red tape and overregulation were often overlooked, especially in the national health system and local government. Yet Italy did not collapse; quite the contrary. Working from home became the norm for millions — Italians learned in a few weeks what ministries, companies and unions would take years to accomplish. Reopening will be slow and cautious — we get that. But instructions ought to be simple and straightforward. On April 26, when Prime Minister Giuseppe Conte announced the details of what is being called Phase 2, he raised more questions than he provided answers.

But all things considered, he has done well despite his lack of experience in public office, and his approval rate is well above 70 percent. He should not waste this reserve of trust and good will. Italians have shown themselves to be patient, resilient and — to the surprise of many — diligent. Now they need reassurance and help. Money is coming too slowly to those who need it — the tourism industry, for instance, which accounts for 15 percent of G.N.P., is on its knees. Banks are not forthcoming with state-guaranteed loans to small business. Too many bureaucrats are impatient to get back to their old, stale ways.

Emotions are Italy’s fuel. At a time like this, they could propel the country toward a better future. Or burn it on the restart line.